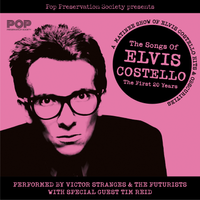 Victor Stranges & The Futurists play 'THE SONGS OF ELVIS COSTELLO'

After their recent sell-out show in September, VICTOR STRANGES & THE FUTURISTS will yet again bring ELVIS COSTELLO's hits and obscurities in a matinee performance at one of Melbourne's most iconic venues, Wesley Anne on Sunday 19th February, 2023.

The 4 piece band will play one and a half hours of songs drawing from Costello's first 20 years from My Aim Is True (1977) to All This Useless Beauty (1996).

Some of the the songs are stripped back, revealing their subtlety, glorious structures and remaining faithful to the original album arrangements. Others are given the full treatment. Playing the radio songs to the more unknown album tracks, it's the ultimate indulgence for the die hard Costello fan.

Wesley Anne is one of Melbourne’s oldest and prettiest venues and is housed in a former church with rough stone walls.