Not Fade Away - Patti Smith in Melbourne (Australia), 1997 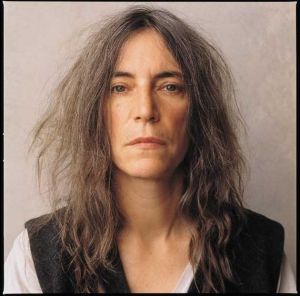 It was probably the best rock 'n' roll show I had ever seen. I like not having expectations before a gig. I like being surprised. This was before You Tube and streaming videos on the internet gave us access to whatever we wanted to see. Sure we had MP3s online but I was a CD aficionado. It was my job as well. Managing record stores was what I did and I eagerly listened to customer recommendations and studied Mojo, Vox and Q magazines They were certainly a lot better than Rolling Stone who had succumbed to inane cover shots of Spice Girls, Salt 'N' Pepa and Brad Pitt. Actually some of the record company reps were a really good source of good music. Although they had a job to do, a lot of them were secretly music fans, and not just record company mouthpieces.

1997 was a time of discovery and appreciation of re-issues but if you wanted to see live footage, you had to go to the show or buy a video cassette. So when I heard Patti Smith was playing at the Palais Theatre in Melbourne, I thought.....hmm. Should I go? I only had her 1975 album, Horses, which I had bought several years earlier from this cool little record store in Dandenong, of all places. It was such a good store. I even bought a Bo Diiddley t-shirt there. I mean who in Dandenong sells Bo Diddley t-shirts? I wish I can remember the name of the store. They certainly were brave. It probably only lasted six or twelve months in the early 1990s.

So back to Patti at the Palais. I had second row seats. My memory is really vague now and I wish I had written an account of the night because it was life-changing. What I remember was the spirit of the show and how it progressively got better and better and better with each song. By the time she came to her last few songs she had stripped to a crumpled t-shirt and was barefoot. It's really hard to explain but she seemed dangerous and I was quite taken at how she encouraged the audience to get out of their seats. I don't know what it was but her conviction was absolute and she seemed to have some sort of authority while she was on stage; a power. I didn't know what it was but I think she mentioned the passing of her late husband, Fred "Sonic" Smith, who had died a couple of years earlier. I also knew what it was like to lose someone when my father passed away in 1989. That understanding combined with the rock 'n' roll spirit of sticking it to the man and being of independent thought really resonated with me. She didn't say those words but I suppose it's her humanity and the fact that you can't pidgeon hole Patti Smith that attracted me to her art. I was deeply moved.

I was very familiar with the career and life of Buddy Holly and it was a nice surprise to hear Patti close with "Not Fade Away." It segued into "Rock 'n' Roll Nigger" then "Gloria." She jumped off stage and ran into the audience to beckon a real connection with everybody there, including me. Those moments I will never forget. I'm not sure what Patti was like in 1975 at CBGBs in NYC because I was only five at the time. It was 1997 and it was a glorious moment.

I was reminded of her greatness a few years later when a friend at a record store encouraged me to buy her 2000 album, Gung Ho. I love that record. I have quietly followed her and admired her in increasing increments. Last year I purchased her most recent work, Banga which is a beautiful record and a glimpse into the heart and mind of a wonderful artist. You know you really like someone's songs when as a songwriter yourself, you wish you had written them. Banga has several. It is my favourite album of hers (so far) and worthy of your time if you are looking for something interesting to listen to. I recently bought a heap of her previous albums which are packaged at a low price on CD. I think it was $20 for 5 albums. That's insane. I'm looking forward to hearing more from the great Patti Smith.

Some links for you: